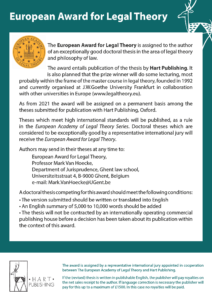 The European Award for Legal Theory is assigned to the author of an exceptionally good doctoral thesis in the area of legal theory and philosophy of law.
The award entails publication of the thesis by Hart Publishing. It is also planned that the prize winner will do some lecturing, most probably within the frame of the master course in legal theory, founded in 1992 and currently organised at J.W.Goethe University Frankfurt in collaboration with other universities in Europe (www.legaltheory.eu).
As from 2021 the award will be assigned on a permanent basis among the theses submitted for publication with Hart Publishing, Oxford.
Theses which meet high international standards will be published, as a rule in the European Academy of Legal Theory Series. Doctoral theses which are considered to be exceptionally good by a representative international jury will receive the European Award for Legal Theory.

Authors may send in their theses at any time to:

A doctoral thesis competing for this award should meet the following conditions:

The award is assigned by a representative international jury appointed in cooperation between The European Academy of Legal Theory and Hart Publishing. 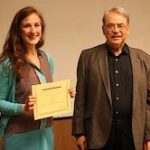 Irena Rosenthal won the shared EALT Award for her thesis "Democracy and Ontology. An Agonic Encounter between Political Liberalism, Foucault and Psychoanalysis", defended at the Vrije Universiteit Amsterdam (The Netherlands) on October 4th, 2012. Irena currently works as an assistant professor for legal theory at VU University Amsterdam. The picture shows her together with EALT president Mark Van Hoecke during the award ceremony on 13 November 2015 at the Goethe University Frankfurt/Main Law School. 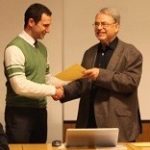 Andrej Kristan (from Slovenia) won the shared EALT Award for his thesis "Law & Other Enigmas.Three Arguments in Favour of a Relativist Theory of Legal Discourse", defended at the University of Genoa (Italy). His current positions are visiting lecturer at the University of Girona and non-stipendary fellow at the Tarello Institute for Legal Philosophy in Genoa. The picture shows Andrej together with EALT president Mark Van Hoecke during the award ceremony on 13 November 2015 at Goethe University Frankfurt/Main Law School. 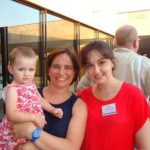 Dr. Maris Köpcke Tinturé, Tutorial Fellow at Worcester College and Lecturer at Brasenose College (University of Oxford), has won the European Award for Legal Theory in 2011. Dr Köpcke's doctoral thesis (University College, Oxford, 2009) studies the moral function of legal validity. It argues that the mechanism of legal validity enables a diverse population to coordinate action around shared standards and that, for this reason, it is morally necessary that legal validity does not (primarily) turn on moral considerations. The award ceremony took place on 18 August 2011, at the International Association for Philosophy of Law and Social Philosophy World Congress. Dr Köpcke (at the right) is pictured with the former winner, Amalia Amaya, with her daughter. Maris Köpcke’s thesis will be published with Hart Publishing, Oxford, in 2013 or 2014. 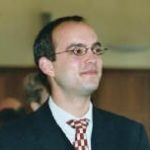 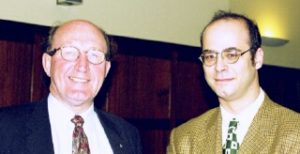 Dr. Fernando ATRIA (University of Edinburgh) with professor Neil MacCormick, during the ceremony for the awarding of the European prize for the best doctoral thesis in legal theory (European Award for Legal Theory 2000). Fernando Atria obtained his doctoral degree at the University of Edinburgh, in 1999, with a thesis on 'The Powers of Application' (about the influence of concrete applications on the meaning of a rule). It was published with Hart Publishing, Oxford, in 2001, as ‘On Law and Legal Reasoning’. He is currently Professor of Jurisprudence at the University of Santiago de Chili. 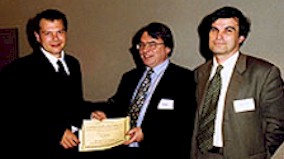 Dr. Scott VEITCH (MacQuarie University, Sidney) during the ceremony for the awarding of the European prize for the best doctoral thesis in legal theory (European Award for Legal Theory 1998). Scott Veitch obtained his doctoral degree at the University of Edinburgh, in 1996, with his thesis on 'Moral Conflict and Legal Reasoning. Contradictions between Liberalism and Liberal Legalism'. It was published with Hart Publishing, Oxford, in 1999, as ‘Moral Conflict and Legal Reasoning’ and as the first book in the European Academy of Legal Theory Series). He is currently Professor of Legal Theory at the University of Hong Kong.

Dr. Emilios CHRISTODOULIDIS (University of Edinburgh) with prof V. Peter (Mùnster) (left) and mr. H.-J. van Leusen (Kluwer Academic) (right) after the ceremony for the awarding of the European prize for the best doctoral thesis in legal theory (European Award for Legal Theory, 1996) by Kluwer Academic Publishers, and the European Academy of Legal Theory. It was published with Kluwer Academic in 1998 as ‘Law and Reflexive Politics’. He is currently Professor of Jurisprudence at Glasgow University. 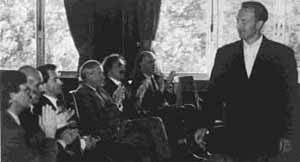 The European Academy of Legal Theory